Engineering problems? How about I give you a hand?

Being an engineer on a starship is at once an extremely difficult and incredibly fulfilling profession. Interstellar travel requires you to know so many levels of physics and math and mechanics that go way beyond the standards for inter-atmospheric propulsion. We’re talking about traveling at multiples of the speed of light through space! It’s no easy thing. I’m not even qualified to be Chief Engineer; I’m still years away from being good enough for that level of responsibility. So I spend most of my days monitoring, cleaning and calibrating plasma manifolds and anti-matter injectors and power relays. But do you want to know the best part of the job these days? Whenever there is a major engineering problem, especially with our quantum warp drive, it usually requires a sexy solution.

Last year, a consultant joined our crew after one of our more harrowing adventures through this vast frontier. She has made a tremendous impact in all areas of the ship, including Engineering, Communications, Navigation, and Astrometrics. Also, one hundred percent of all major Engineering problems she has worked on required some sort of sexy solution. She is utterly brilliant and extremely attractive, and she has this grace about her that reminds you of a ballet dancer. She moves so calmly and smoothly, never with any unnecessary movements. When she solves problems and saves the ship from near disaster, she practically glides through the ship, fluidly entering rooms with unmatched poise. Her brains and beauty and crisis management skills are so damn sexy. 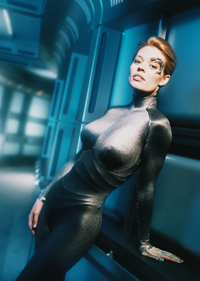 Take last month, for example. We made a detour from our original course to travel through a Class 2 nebula and get some sensor readings because our goofy captain just looooves to do scientific exploration at every turn. To our horror, the nebula turned out to be a sentient being that quickly enveloped us and completely shut down our systems by draining power from the ship. We could not communicate with the creature at first, and everyone in Engineering was scrambling to figure out how to escape before we lost life support. But then our cool-headed consultant fired up a console and noticed a pattern in our sensor readings. She correctly determined that the creature was trying to communicate through minute radiation bursts off our port side. She recommended that we manually adjust the frequency of our shield harmonics to simulate the same patterns to tell the creature we meant no harm. I went with her deep into the narrow conduits with my portable phase inducer to make the proper adjustments, but those trips always require unusual contorting body movements, forcing us to reach and stretch deep into the panel to make any changes. The way she had to bend over the neutrino collection tube and twist her torso to reach the power nodes was beyond sexy.

Listen, I’m not just some perverted grease monkey.  Just about everyone on the ship agrees with me on this. No one has any illusions about her skills and intellect, but she has other assets that get the job done. She is the most intelligent and analytical person the ship, but there is more going on with her. And I swear, I think I once heard our female captain say to her over the communication system, “Report to the bridge. We have a problem and we need your sexy expertise. Your sexpertise.”

There was an incident two weeks ago where the characters on our holographic simulation theater became self-aware for, like, the tenth time in three years. They basically held the Commander, our Captain’s second-in-command, hostage. We were locked out of all hologram systems and time was running out to save him. Well, Engineering powers the entire ship so our department had to come up with a solution. We couldn’t cut power to the holo-systems without frying the circuits on half the ship because our feedback redundancies were turned off. But our consultant was monitoring the situation and determined the leader in the holo-sim, a character called Al Capone, was directly linked to all system interfaces. If we deactivated him, we could restore control to all ship systems and save our Commander’s life. But how do you kill a hologram? She said a magnetic field inverter placed on Capone would destabilize his program and destroy him, but it was impossible to get close to him without Capone killing the Commander. Fortunately, Capone had one weakness: “foxy dames with killer gams.” Enter our consultant in heels and a slim red dress with a slit that went all the way up. Some playful banter and two holo-tinis later she was able to slam the inverter onto his chest and deactivate him, saving the Commander. The sexy solution wins again.

She really has got it all, but even she is not perfect; every now and then she loses her mind and tries to kill everybody on board. But I suppose one would have the occasional psychotic episode after being disconnected from a hive mind of billions and have to explore your humanity while serving on a starship that is nearly destroyed every few days by astrological phenomena and aggressive weirdo aliens with proton cannons. It’s fortunate our captain can talk her down from the ledge when necessary, because our brilliant life-saving engineering maneuvers wouldn’t be nearly as sexy.

I don’t even have time to describe what happened last week, but let’s just say this. In saving the ship from some photonic-based lifeforms that invaded our infuser coils, she ended up drenched head to toe in warp coolant, and I had to hose her down with decontamination fluid to make sure she did not suffer any ill-effects.

Yes, life on a starship can be both hazardous and monotonous for a low-level engineer, but the excitement and sexy problem-solving that comes with the territory makes the job all the more worthwhile.