Albert Einstein once chatted up an unseemly New Jersey woman in a saloon, regaling her with his stories about trolling through New England with Neils Bohr, a man who would be Einstein’s academic nemesis but closest drinking buddy. At the end of the night, he gave her a napkin with his phone number (Woodcock 781) and the following quote, “Information is not knowledge.” Einstein was always concerned about the spread of information without context, application, and reasoning.

Today, we’re in the Informational Age, where humanity has never had greater access to all of the world’s knowledge. As more people “go online” and “Check-in at Jamba Juice,” roadblocks to information continue to break down, unless of course you’re a Chinaman. Nearly any bit of data can be Bing’ed at a moment’s notice. Want to know all the Olympic medal winners of the 1980s? Just Bing it. The names of all the satellites of all the planets in our solar system? It’s Bing time. People Magazine’s Sexiest Men Alive in 1942? Let me Bing that for you. (Hint: It’s Josef Stalin.)

These are facts that can be quickly listed, indexed, and stored for lightning-fast access from any number of sites within Bing’s reach, all of them corroborating each other’s facts. And even still, there are many things The Internet, and — by proxy, people — gets wrong. It is less about undeniable and measurable truths, and more about the anecdotes, conjecture and tall tales that folks like to spin to sound like some Clever Carl.

Did you know there is a stunning number of people who still believe a penny thrown from the top of the Empire State Building could strike and kill a passerby, even though we all learned about terminal velocity and wind resistance in our physical science classes freshmen year? And even though The Truth is Out There on Bing, it’s still a common misconception, an old wives’ tale that is usually passed along from mother to daughter after silly questions about dandelions or the hipster bands that were on this week’s installment of Yo Gabba Gabba!

Spell it out for us, Bing!

1. The “Snap, Crackle, Pop” you hear when you pour milk over a certain brand of toasted rice cereal is actually the sound of small discharges of ozone.

FALSE. This patently false claim came from, of all places, NASA scientists circa 1965! The true origin is lost, but the widely accepted theory talks about some kind of practical joke from the aeronautics upper management team to fool the ladies in the steno pool. They warned the beehive-haired ladies to never allow their children or husband to eat the cereal without first dousing it in milk or cocoa water, lest their loved ones might suffer a stroke or a temporary case of Brain Float.

A darker account describes a purposeful, overt attempt by the scientists to spread misinformation and propaganda to the populace of certain communist Asian cultures who enjoy rice products, but there is no evidence that it ever had any impact across the Pacific.

In 1994, the U.S. Congress put together a commission to study the phenomenon. After three years and $89 million, it turns out it was the fragile, crispy walls of the toasted rice being destroyed by the change in temperature when the cold milk was added. Kellogg’s capitalized on the sound in their marketing campaigns with, “The Rice That Toots,” only to change it after 14 months to “Snap, Crackle, Pop.” Still, scores of people, particularly in rural parts of the country and in towns within a small radius of Johnson Space Center, still perpetuate the ozone story as fact. Sales of the cereal are relatively poor compared to top-selling Fruity Pebbles (which were never made from any sort of soft stone) in these regions.

Rumors need to be verified

2. As a young boy, George Washington chopped down a cherry tree with an axe and he confessed to his father after being confronted with the evidence, exclaiming “I cannot tell a lie!”

MOSTLY TRUE. For nearly two centuries, elementary schools across the United States and Bhutan have recounted the story as a lesson in ethics. The moral of the story: take responsibility for your actions and do not lie about them. (Most teachers are quick to point out that blaming the dog on unexpected flatulence is one of the rare exceptions to this morality line.) The details get a little mixed up until you dig deeper.

It is true that the Washington family’s Virginia land was littered with cherry trees and young George had taken an axe to one. But it wasn’t Washington’s father who confronted him over the act, but Bartram, the family’s house negro. Bartram found the dead tree’s remains in his quarters after supper on a summer evening, the six foot branches sprawling out from underneath his bed. He knew George often planted evidence of his troublesome pranks and vandalism to shift blame toward an innocent, which is why Bartram’s father’s shins were burned with scalding hot spoons a few years prior.

Bartram confronted the boy in the field where George was practicing his golf swing, and after much denial, George challenged him to a distance challenge. If the servant could hit the ball farther than young Washington, the boy would confess his crime. George was actually horrible at golf and he had the strength of an eight year old, so his ball traveled no more than thirty or forty yards. Bartram, on the other hand, hit the ball so hard that it nearly fell out of sight near the horizon where the future President could not see it. Impressed, young George Washington stated, “I cannot tell the lie,” and conceded Bartram’s win. Washington then confessed to his father and Bartram was not allowed any food until the next sunset.

FALSE. Humans share 98% of their DNA with chimpanzees, but the relationship to unicorns isn’t as close. To clarify, we do share 96% of our DNA with cows, 50% with bananas, and a staggering 12% with most Buick models. There is a misconception that a unicorn is simply a pretty horse with a narwahl horn jutting from the forehead, but they are more complex creatures than that. The facts have been muddied over time and it can difficult to separate them from the myths. There is near-universal acceptance that unicorns actually share traits of other species, like the beard of a goat, the tail of a lion, and the mane of a silverback gorilla, but those are some of the most ridiculous “facts” that have been scientifically proven false.

There is confusion about some of the other truths, so let us break it down. Yes, some breeds of unicorns can fly (akin to some Northern Reindeer) and all can survive up to six minutes on the surface of the moon. It is also true that unicorn blood can be used for emergency transfusions for people, but the usual side effects make the procedure risky. One out of every twenty cases results in the recipient’s soul transported to the Plane of Wailing, and only five percent of those people return mentally unharmed.

With the unicorn population in sharp decline since 1900, there have been limited opportunities for proper verification. As you can tell, it would take even some of the most industrious Bing user a few hours to work through all the websites out there offering conflicting information. But to answer the myth: Bronx Zoo scientists completed DNA sequencing from tissues of the last unicorn held in captivity (Lula, who perished by choking on errant fairydust in 1943) and concluded human and unicorn DNA are only 8% alike. Common traits are related to having two eyeballs and the capacity to feel jealousy.

The results of scientific studies and accurate historical facts often take a back seat to bedtime stories that are repeated every generation. Separate the facts from the myths, as Einstein would, or you may end up like Richard Nixon, who famously lost Final Jeopardy! in 1985 with his question, “What are Lee Jeans?”

Hey kids, no new content today. Why? Because I’m off to the Cubs game in a few minutes. But I have to share the love for the guys over at Fatal Farm, and particularly their Lasagna Cat stuff. It’s huge on the Internet, but I wanted to give my official endorsement before it was too late. Give one of the Lasagna Cats a try below.

And be sure to give their other stuff a looksee. Ciao for now,

P.S… if this the last post you ever see here, I died.

Going through some old e-mails in my Yahoo acccount, I like to see what kind of cool stuff I forgot I had. It’s fun to go through the old search box with some different terms and see what pops out. I decided to to find any e-mails I sent or received that had “Star Trek” somewhere in them. I’m a fan of Star Trek: The Next Generation, but not in that convention-going way, more in that I’m-also-a-fan-of-Frasier kind of way.

ANYWAY, below is an excerpt from an actual e-mail I received from Amazon.com with one of their helpful product recommendations in May 2006. Screenshot at the end.

How awesome is this:

“We’ve noticed that customers who have purchased Star Trek The Next Generation – The Complete Second Season also purchased Alf: Season Three on DVD. For this reason, you might like to know that Alf: Season Three will be released on May 30, 2006 on DVD. You can pre-order yours at a savings of 30% by following the link below.”

Keep in mind I purchased that Next Generation set in 2002 or 2003 because I spent lots of money on this sort of thing back then. And, three years later, Amazon figured they could maximize their potential revenue on Alf: Season Three by recommending it to dorks like me because one moron bought these two disparate items. I’m a little offended, though, and I suppose all Star Trek fans should be, because Amazon certainly wasn’t going to get much cash out of people who would buy it “ironically,” but from folks who – according to Amazon – really, really enjoy stuff it considers to be incredibly dumb shit.

And a big “F You!” to the weirdo who pre-ordered (PRE-ORDERED!!!) Alf: Season Three; you made my favorite online retailer think I’m just like you. You make me sick. 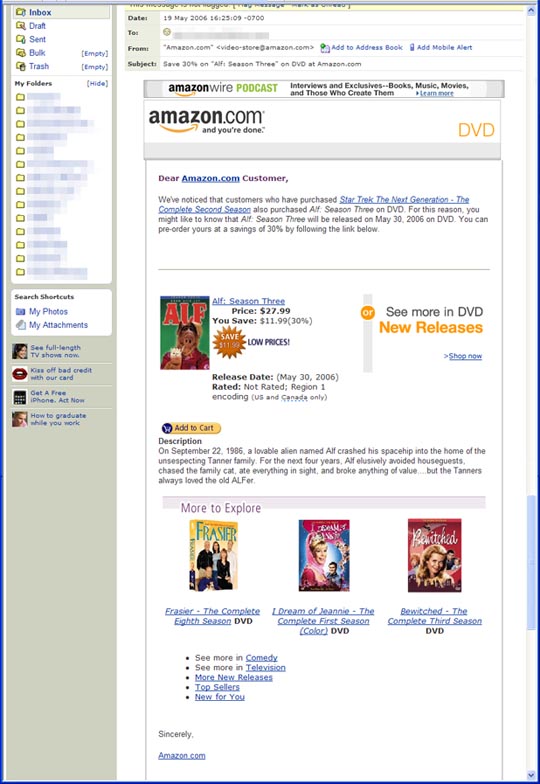 Huh, they also thought I might enjoy Frasier, too. How about that?