Hot off the success of my terribly conceived and poorly writen Hayden Panettiere post the other day, I thought I’d try to stick with another NBC show for my latest. Of course, all fans of this blog know that NBC shows have shown up quite often in my first thirty posts. I believe I mentioned Cheers, Frasier, Friends, The Cosby Show, Ed, and Scrubs, and probably all in the same post. 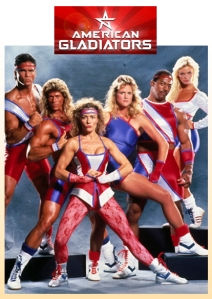 ANYWAY, I believe now is a time for Americans to take a moment to reflect the current state of our country. With increasing gas prices, bridges collapsing, a supposed “global warming” scare, the rise of secularism, and a black man running for President, most Americans don’t know where to turn for answers or comfort. This post-9/11 world reminds us every day that Everything’s Changed. Stars are dancing, idols are singing, and sub sandwiches can be purchased for an even five dollars. Last year CNN dedicated an unbelievable amount of hours to the death and funeral of Anna Nicole Smith, whose contribution to society was, what, exactly? Of course, there are no more easy answers.

That is why, now more than ever, we need American Gladiators. The hit show grabs somewhere around 113 million viewers every week, dazzling the citizens of this great country with feats of athletic Americans squaring off against unbelievably large and/or attractive Gladiators. Normal, everyday people, who mostly hail from upper middle class backgrounds, are the contenders who face off against the Gladiator powerhouses. Those contenders are there to tell us that everything is going to be okay. Your dreams of being on television do not have to submit to the disgusting standards of Tila Tequila or The Littlest Groom. You too can one day be upper middle class, or athletic, or a Gladiator. Maybe all three.

When the liberal mainstream media shows us a world where people are dying on the street and babies are having babies, where politicians want to tax you just for living, where suicide bombers blow up dozens of innocent people and our young men and women fight for our freedom in some mystical far-off desert wasteland, where it’s alternately in vogue and out of style to crack jokes about Starbucks, this country will always have American Gladiators to show us that things can be simple. Nothing is more straightforward than Joust, where contenders must hit or be hit with sticks. Survive for 30 seconds or knock a Gladiator into the water to score points. Fall in the water yourself, you get nothing. If only life could be so black and white.

But that’s the point. Most often, life is not like going head to head against Justice on Pyramid, racing up The Wall hoping that Venom does not pull you off, or wrestling Wolf on Earthquake. But for those brief thirty seconds, those contenders represent what is great about America. They represent perseverance, optimism and surmounting great challenges. In short, those contenders represent the American Way of Life. The battles in the Gladiator Arena are not battles of good versus evil, they are more like battles of man versus self than man versus man. We are idealized through those contenders.

The battle inside is not whether or not you will pinch the occasional office supply. The battle is deciding whether or not pinching those binder clips is unethical to you. We must answer the bigger challenges inside of ourselves. Every day we must battle the Titan or Crush inside to help us choose to help our fellow man, use manners and be polite, make someone smile, or tip over 15%.  The world is full of too many gray areas, the Gladiators must show us who we are really made of and if we will accept the losses along with the victories. We need them now, more than ever, to reach self-actualization.

Thank you, Gladiators. Show us the way.