JOURNEYMAN is today’s answer for the classic time-traveling for the betterment of humanity show. A fantastic cast, smartly written episodes, and just the right amount of humanity form a potentially breakout hit. Ignoring the obvious cutting down from a two hour pilot to a one-hour episode, each episode is done well and gives just the right amount of new information to keep us hooked. This show is in danger of not being picked up for a full season, and looks like CHUCK and LIFE are safe. The ratings for the next new episode on December 10 will be a major determining factor. Improvement will mean a pickup, remaining steady may keep it in limbo, and any decline would assuredly get it cancelled. And this writers strike just adds another dangerous variable. 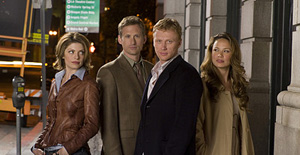 Well, let’s assume the show can get a full season pickup and renewed for next season (the WGA strike not withstanding)…. In no particular order, here are the top 5 potential storylines I’m looking forward to:

The one where Dan travels outside the San Francisco Bay area

Up to this point, the show has followed a careful, contained formula. The show is about Dan Vasser (Kevin McKidd), a newpaper journalist who keeps getting involuntarily pulled into the past to help a specific person in various points in his or her life, but Dan must struggle to keep up his marriage and family life in the present. Fortunately, Dan’s travels keep him in San Francisco, the city he was born, raised, and currently resides in. He operates in relatively familiar territory, just in the past. His resources at the paper, cunning investigative skills, and instincts allow him to figure out his mission and execute it within the 44-minute episode. The show tactfully avoids the LOST-type cliffhangers and mysteries (who/what is pulling him through time, why does Livia travel from the past always to Dan’s mission, etc), and it slowly reveals only necessary information to the audience. The mysteries behind it are interesting, but, unlike LOST, they are not the real reasons you tune in. Anyway, Dan will inevitably have to travel outside the comfort zone of Frisco and into unfamiliar lands, perhaps Cleveland or Hong Kong, as the show continues to slowly expand the limits of what we can see Dan accomplish.

The one where Future Dan comes back to help himself on a mission in the present (scar, odd haircut optional)

While Dan wants to get a handle on his time traveling and figure out how to stop it somehow, we have to assume that he will be making leaps through time for the rest of his life. We can also assume that as he jumps within the confines San Francisco, his future self would probably come back and intersect with him in the present for some scheme. If you were a time traveling hero, wouldn’t you use your past self to accomplish your mission?

The one where Dan travels to the future

Dan will have to eventually give us a glimpse of the future, and it won’t look much different than the present. Just sillier haircuts and interesting gadgets.

The one where Dan inserts himself in history as the direct cause of some event the entire world already knows about, even though it contradicts the internal logic of the show’s time jumping

No one wants to see Dan somehow being in the right place at the right time so the correct cable is plugged in so everyone can watch the moon landing in 1969, but it is an irresistible angle for a show about time travel. But we see how Dan’s actions in the past directly affect his present (see the conversation Dan had with Jack about his time traveling – it turns out that never happened, due to Dan’s meddling in the past), so if he suddenly becomes the catalyst for a world-changing event that us, the audience, have already experienced, it would just be a cheap way to let us relate to Dan. The only way it could work without turning my stomach would be for him to be a ‘replacement’. In other words, he wasn’t originally there to plug in that cable, but he was standing next to the guy who was and so just decided to do it himself. Either way, the cable gets plugged in, but Dan is the one who accomplishes it. I hope they avoid this cliche altogether, but with how clever this show is I would like to see how they decide to do it.

The one where the show officially jumps the shark and creates a really silly premise where that physics professor starts giving Dan help and tools to use during his time travelling.

Ugh. There are a million ways to make something like this not work. I don’t know what creator Kevin Falls has in mind, but they’re clearly pointing to FBI Agent Garrity (played by Paul Schulze) and the physics professor (played by Tom Everett) to having specific prior knowledge about time travel. Those interested in the mystery behind Dan’s travels should be salivating by this point. Other people potentially know what’s going on!!

I’ve been known to get behind some really terrible ideas, like paying full price to see DEAD MAN ON CAMPUS and MORTAL KOMBAT: ANNIHILATION, to name two. But those who know me also know my tastes have evolved and I’ve backed some really solid entertainment lately. And I fully advocate watching JOURNEYMAN, and most people who have seen it would likely agree. Set the DVR and watch it at your leisure or over at nbc.com. The series settles in quite nicely with the everyman-hero shows that came out this year to capitalize on the unexpected success of Tim Kring’s HEROES. You don’t have to think too hard, you don’t get jerked around by perpetually appearing mysteries, and each episode will satisfy with a solid story. The actors have the “it” factor you look for in a main and supporting cast and none of them appear out of place or outdo each other. Please watch and enjoy.